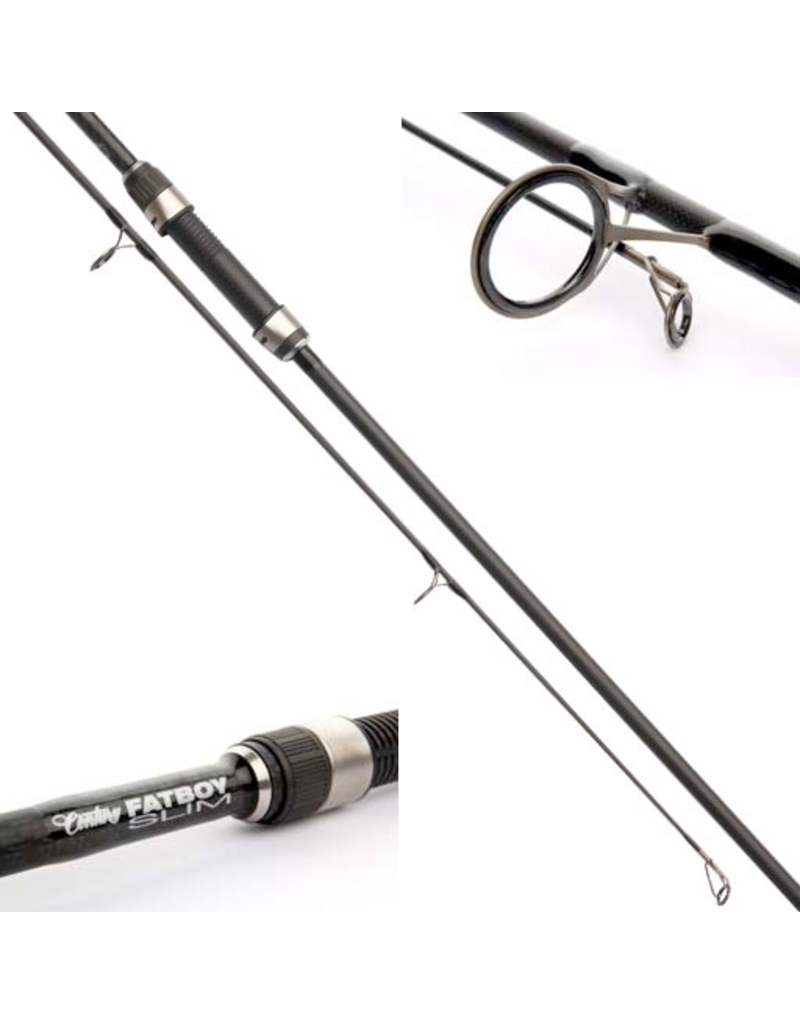 The Fat Boy Slim (FBS) is Century’s ultra low diameter rod with a glorious sweeping parabolic curve that will tame and control. The design is incredibly complex to give the profile, action and weight that will appeal to the carp angler who does not need extreme range but wants the response and control element of his fishing totally sorted. The FBS has already seen extensive action and has hundreds of trophy fish to its credit.The over riding reports coming back from anglers is the fishing range of 140 metres on the higher test curve (3.50lb) is more than adequate and the action makes playing – perfect. The lower test curves are ideally suited to smaller venues where casts of 100m are typical. The FBS is capable of controlling the ferocious runs and imparts confidence throughout the battle. We have an account of just such a situation where a struggle with a 40 turned into a battle with something much bigger! The Fat Boy Slim was originally launched in early 2000 and since then has been modified on two occasions to reflect advances in materials and surface finishes however the fundamental action and design principals have remained true to the originally concept – control, sweeping parabolic curve and a true players rod. We have now evolved the FBS into a more contemporary version to reflect the more demanding international requirements where it is commonly used in southerly latitudes. The new finishes are more resistant to high levels of ultra violet light, scratching and scuffing. The carbon finish below the handle is a woven fabric that we shared with the original Toyota F1 team and above the handle a 1k-1k fabric that we order in conjunction with another leading German car manufacturer that makes the fastest sports car in the world: we maintain a Class 1 finish. Above the first ring on the tip we feature a sealed UD carbon finish. Probably one of the lowest diameter carp rods in relation to its battle curve available: attributable to our Autoclave Technology and AT-T (Anti Twist Technology) The FBS is fitted as standard with Century 3K-3K carbon reel seat capped with carbon collars and stainless steel trims. The butt grip is JSR and capped with a lasered stainless steel trim band. The whole rod is sealed in our durable PTFE/Silicone finish giving a cool matt effect. The standard guide configuration is Century SiC starting with a size 40 and a size 12 tip. Optional Fuji K guides are also available and the illustrations below show the FBS fitted with optional black Fuji Alconite K guides. Erich Unger landed what we believe is one of the biggest carp ever caught on a FBS. The Black Carp topped the scales at over 60kg and testament to what a Century rod can do in the hands of skilled anglers.